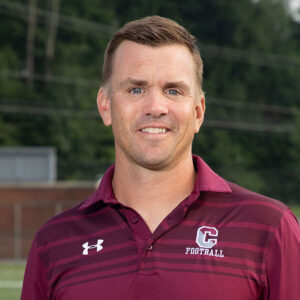 Coach Diamond is entering into his third season as the Head Coach at Conestoga. Coach Diamond is a 1998 graduate of Conestoga High School, serving as team captain in both football and baseball. In football, Matt was first-team all-area as a defensive back and quarterback. Matt played college football at Gettysburg College, where he was a 4 year starter and received all-league recognition his senior year as a defensive back.  After graduation in 2002, Matt coached defensive back at Bigglerville High School outside of Gettysburg. In November of 2016 Matt was inducted into the T/E Old Timer’s Conestoga High School Football Hall of Fame. Matt, a teacher at Valley Forge Elementary since 2005, and his wife Krissy, also a teacher in the district, have 4 kids. Matt is also the Head Varsity Baseball Coach for Conestoga.