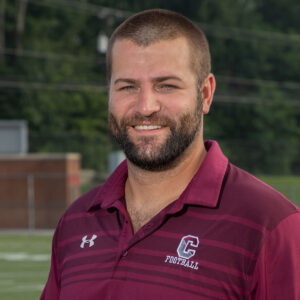 Coach Kaminskas is in his fifth year with the Pioneers. Matt Graduated from Conestoga in 2008 as a 3-year varsity letterman and served as team captain. Coach Kaminskas attended Kutztown University where he played defensive end and was part of the PSAC championship team in 2011. Matt graduated with a bachelors in history and is currently earning his teaching degree at Cabrini College.  In 2015 Matt was a defensive line coach at Valley Forge Military College. Currently, Matt holds a position in Conestoga as part of the security team. Matt will be coaching the defense for the Pioneers.