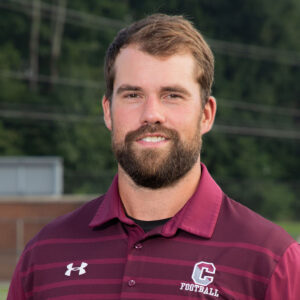 Coach Davis returns to Conestoga to work with the offensive and defensive lines. Previously, Davis served as the run-game coordinator at Archbishop Carroll and looks to bring his knowledge of that side of the ball. A 2004 graduate of Strath Haven High School, Gordon played offensive line for the Panthers.  After high school, Coach Davis played 4 years of varsity offensive line at Delaware Valley College where he earned Middle Atlantic Conference honors in Academics as the Aggies won several conference championships.  Coach Davis later earned his Master’s in Education from West Chester University and has taught English and science in the T/E school district for the past 9 years. In the spring, Gordon coaches middle school lacrosse at TEMS. Gordon and his wife, Jenna, live in Upper Merion.